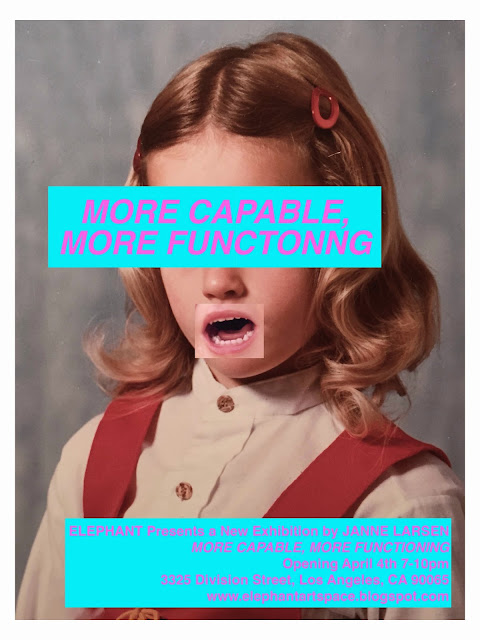 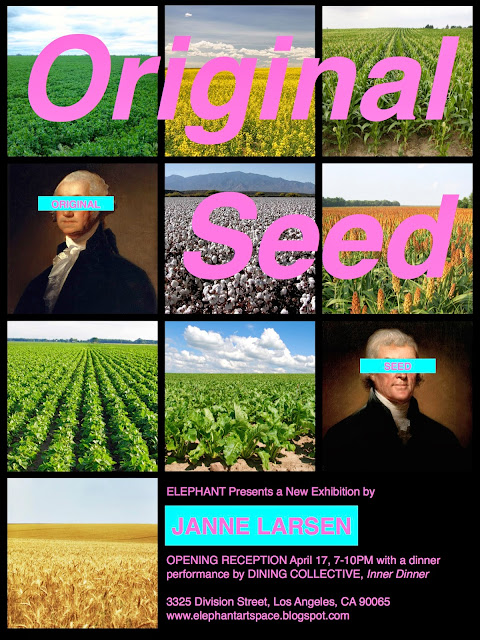 Elephant will be exhibiting two bodies of work by Janne Larsen.

Janne Larsen’s exhibition, More Capable, More Functioning, presents drawings, wall hangings and laser cut acrylic sculptures as visual diagrams of human functioning. New brain research has discovered that the human brain can simultaneously handle learned habit tasks (like driving) and more difficult non-habit tasks (like planning a presentation). This dual system allows humans to multi-task. It’s why someone can plan their day while driving during a morning commute, and when they get to work remember their schedule but nothing about the commute itself. In this body of work Larsen explores the unconscious tasks that are associated with parenthood and domesticity; functions that exist in a matrix of banality, repetition, and exhaustion.

Food, in the end, is something holy. It’s not about nutrients and calories. It’s about sharing. It’s about honesty. It’s about identity. - Louise Fresco

The act of putting into your mouth what the earth has grown is perhaps your most direct interaction with the earth. - Frances Moore Lappé

Patent exhaustion does not permit a farmer to reproduce patented seeds through planting and harvesting without the patent holder's permission. - Opinion of the Court, Bowman vs. Monsanto

In Original Seed, Larsen looks to the language of Monsanto patent lawyers to elucidate our complex relationship to food. Four traditional watercolors that portray Monsanto employees as heroic crusaders against world hunger are paired with four sculptures that borrow the language of the lawsuit Bowman vs. Monsanto. The watercolors are humorous attempts to visualize Monsanto’s stated commitment to end world hunger, protect rural communities and grow food more efficiently in order to help farmers stay in business. The silicone sculptures utilize Monsanto legalese to explore how we have become very submissive about food. Together they explore how the food industry has transformed a nation of farmers and people who worked the land into passive consumers that buy food without thought about it’s source or progeny. We have casually given our power away. The work attempts to explore with humor why we have chosen to do that.


Janne Larsen is a Los Angeles based artist and educator. She has designed theater, opera, dance and installations throughout Los Angeles and New York. She has exhibited her artwork locally and internationally. Her work has been seen at Symphony Space, Pomona College, Cal State Los Angeles, Califonia Institute of Technology, California Polytechnical Institute, Horsetrade Theater, Los Angeles Municipal Gallery, Workspace, Weekend Gallery, Telic Art Exchange, Outpost for Contemporary Art, The Municipal Gallery of Assisi and The Washington Museum of Art. Janne received her MFA from CalArts in 2007.

Larsen’s work may be viewed at jannelarsen.com