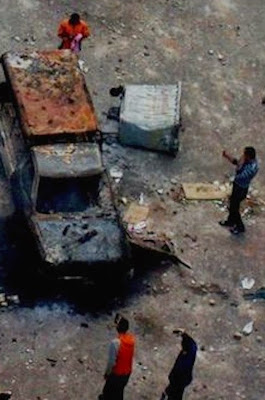 LA based artist Diana Sofia Estrada presents new work at Elephant. In this installation of work, Estrada focuses on traveling without doing harm. The term “ harm” is applied broadly, the idea being that whenever people travel, we leave or do something to the immediate environment or community. Traveling without doing harm is an impossible, but lofty, goal for one who wishes to be as respectful as possible to an area they are visiting… maybe.

Drawing upon Estrada’s experiences in travel, often being mistaken for a local, this body of work comments upon traveling as a source of “inspiration.” Using imagery she took while in Alexandria and Cairo, Egypt during the summer of 2009, she contrasts this with images taken while her parents were living in Alexandria during the January Revolution of 2011, known in the U.S.A. as part of the Arab Spring. Addressing issues of cultural insensitivity and voyeurism, Estrada’s works seek to record immediate reactions and considerations unto themselves, creating an installation of paintings and objects that voyeuristically contemplate beauty and change.

Estrada has also organized a group of artist performances that address the title of the show, “Traveling without doing harm” through the issues of identity/persona, urban planning, immigration, and capitalism. The artists are Joy Harris, Guan Rong, Henry Taylor, and Diana-Sofia Estrada. Performances start at 9pm on the night of the reception.

Jeanette Joy Harris is an artist and writer who lives in Houston, Texas. She has had solo and collaborative works shown in Chicago, Los Angeles, San Francisco, Portland, and Houston. Her work will also be shown in December at Miami Photo Salon, an exhibit associated with Miami Art Week. She has published work with TribTalk (editorial section of Texas Tribune), Glasstire, and Illusion. With a background in philosophy and politics, Joy has also presented academic work on the concepts of public space and action. Her blog www.duchampintheoffice.com connects “normal” people with contemporary art. @duchampintheoff

Guan Rong as “Ms. Rachel” has been teaching art classes to children and youth in the San Gabriel Valley area since 2005. She adopted the name “Rachel” right after she graduated from the School of the Art Institute of Chicago with a BFA. Finding it difficult to be “Ms. Rachel” while teaching art and also attending CalArts, she left CalArts after a year of study in the MFA program. Being “Ms. Rachel” while teaching is her main source of income that supports her art making as Guan Rong. Guan Rong has exhibited and performed at the Armory Center for the Arts, Riverside Art Museum, The Velaslavasay Panorama, KCHUNG Radio, Rowland Contemporary (Chicago), and Blutenweiss (Berlin). Guan Rong makes paintings, films, books, performances, and radio shows with John Burtle. She recently participated with KCHUNG at the Made In LA 2014 at the Hammer museum.