past exhibition
Tanya Brodsky
First there was. And then there was.
6.8.2014 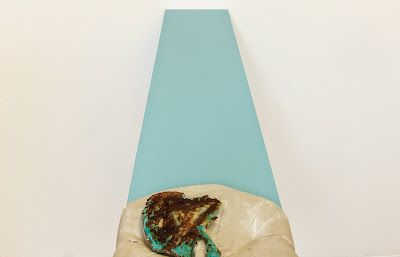 Tanya Brodsky
First there was. And then there was.
Opening reception Sunday, June 8, 5-9 pm


Elephant is pleased to announce First there was. And then there was, an exhibition of new works by Tanya Brodsky. This installation presents a space full of imminent problems. Things are (maybe) about to slide off, overflow, disintegrate, cause bodily harm if not approached with caution. Objects seem to be missing, with only the impressions made by their mass remaining as a record. The intentionality of the objects that are present is questionable. Things are simultaneously much more and much less stable than they appear to be. Contamination is a real concern. There is a dichotomy between permanence and impermanence, the utilitarian and the obtrusive, the mundane and the sanctified. It might all be a joke with no punchline.