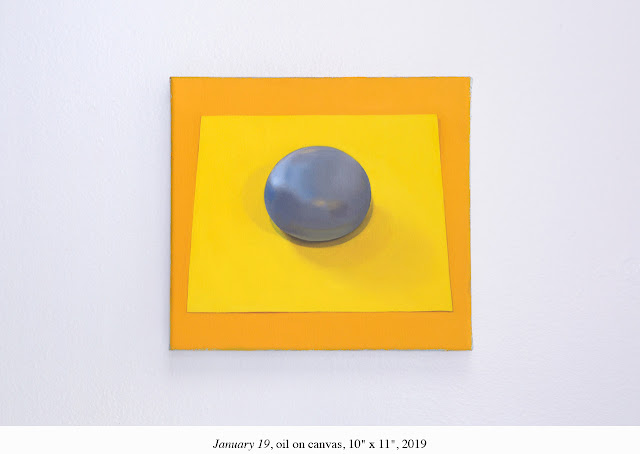 The mannerism of nature caught in a glass
And there become a spirit’s mannerism,
A glass aswarm with things going as far as they can

As much as his lifelong day job as an insurance executive was tethered to the concrete, Wallace Stevens’s poetry often latched onto quotidian characters in nature like the moon, the seasons, fruit, clouds or birds. In the alchemical context of a Stevens’s verse, such common nouns are slippery and expanded, yet somehow even more elemental. In this altered existence, for example, a piece of fruit grapples with something beyond nature, pointing past its familiarity towards the abstract and sublime.

In the process of poetry, language itself can undergo a related transmutation as its sound is heard anew— rhythm, syllables and rhyme winning out for a moment over the usual denotative value of words.

“a single set” is composed of small paintings of anonymous objects, each one like a monosyllabic statement standing in for a word that doesn’t exist. Resisting modularity, they do not form a sentence. These flat, rectangular objects sit on the plane of the wall, casting their shadows on that wall like the subjects depicted do within the colored surfaces of their worlds.

Window pane. The process of making these paintings was a humbling reminder of the nature of time and, well, nature. Arranging an object in front of a north-facing window, I was simply trying to fix a form in time and space, like painters have done for centuries. Yet, of course nature is never the same from one moment to the next, from one day to the next, and in confronting this obvious phenomenon I felt the everyday paradox of perpetual change within rigid stillness. The unstable, shifting light was like my own breath in meditation, gently returning me to the passage of time.

Picture Plane. This process unfolded along with another quasi-metaphysical mystery: the canvas functioning like the boundary of the self, where one sees without really knowing, perceives without fully understanding. I was trying to relate one small experience in the world—beautiful, rich and concrete on the one hand, yet mysterious, abstract and distant on the other.

Pain. On yet another plane altogether, pain. Pain like that of a childbirth I will never know, these paintings were born of a hypothesis of doubt and from an experience of pain. Over a period of numbed months the paintings began to populate my unfamiliar studio. They looked and felt rather foreign, like a new family of alien objects that kept multiplying.

“It is in the nature of the work that listing its possible referents can neither fix nor exhaust the significance it has for us: It seems that only repeated and excessive contact can do that. The claim that the work is unique implies this. That is, if there is just one, then its “meaning” cannot be successfully rendered in language.”

In her brilliant essay, the fulcrum Adrian Piper uses to philosophically suss out an artwork’s relationship to other objects in general provides a curious framework within which to consider these paintings in particular. Or, put another way, these paintings could provide a funny and literal illustration of her hypothesis.

Listing the possible referents of January 19, for example, one might have difficulty naming its specific subject matter—a stone? A cap? A knob? And in fact, this is the point—to portray objects that at once can be understood physically but not narratively/symbolically. This is not intended to be coy, but to portray a thing that quickly frustrates the process of naming in order to privilege the physical, visual and poetic qualities of perceived reality, i.e. color, scale, shape, shadow and light.

Piper continues: “The relation of an artwork to other facts in the world is epistemologically analogous to that between a proper name and the sentence in which it occurs: for all the “meaning” or information a proper name gives us, it may as well be an ellipsis.”

Part of the “meaning” according to Piper’s formulation, of this work, has to do with the tension between the mode of perception used to compose the subjects versus the mode of pictorial representation used to present them. Collecting and composing these found objects and colors requires a decadent vision, negligent of its usual informational/need-based directives— hijacking, misconstruing and sampling instead. The mode of representation, on the other hand attempts to “go as far as it can” in its realism, to be more responsible and functional. Hopefully, the paintings are such ellipses punctuating space (dot, dot, dot, dot, dot), whose actual meaning this language cannot render.