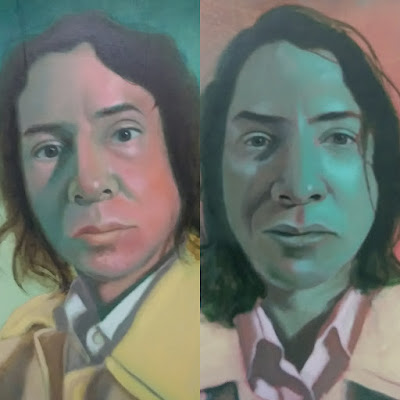 Open Saturdays and Sundays from noon to 6pm

Elephant, in association with Pretend Gallery, is eager to present Adult Contemporary, a solo exhibition of new self-portraits painted by Jonathon Hornedo.

Adult Contemporary is also the title of Hornedo’s forthcoming second visual album. In 2016, with Art Catalogues at LACMA, he released his debut album called What’s Knew, a group of small individual prints of abstract paintings that were rich in tonal variation, color, and shiny lines. For Adult Contemporary, Hornedo maintains an exploratory use of color with translucent stains and opaque layers in oil. There is still some shine, especially in the T-zone area. Hornedo’s interactions with the genre of self-portraiture bridge structured improvisation, self-channeling, and alignment of material and subject. His strokes are broad, loose, and tight. The subject is mannered, illusionistic, expressive, and distortions ooze through the cracks. On view at Elephant are a selected preview of paintings for the new solo album of 11 prints called Adult Contemporary.

There is more than one Hornedo in this show. There’s a red Hornedo. A gold one, a blue one, and one where he kind of looks like a vampire. In another he looks like an androgynous green alien with greasy long hair. He’s wearing the same thing in each painting like a uniform, the same white collared shirt and dull ochre peacoat that he bought specifically for this project. He appears calm, anxious, annoyed, and joyful. This is a guy who once slipped on a banana peel. It’s the face he often made when telling people about these paintings before he painted them. It’s the Pura Vida vibe of a first generation Costa Rican who accidently took a dance class once and saved all his receipts last year to calculate his business tax deductions and who recently bought a cold-pressed masticating juicer. He masticates daily now. Sometimes twice a day.

15% off pre-orders for Adult Contemporary at the opening. The album includes 11 individual prints, digital copies, a soundtrack, and an opportunity to have your portrait painted by Jonathon Hornedo.

No Way Rosé by Pretend Gallery

Jonathon Hornedo was born in Long Beach, CA in 1982. He has a BA in Art from UCLA and graduated in 2010. In 2012 his solo show Canvas Panels was reviewed by David Pagel in the Los Angeles Times. Pagel said he was “wicked silly and wildly intelligent”. British journalist Sophie Heawood has called him “a most excellent man”. Paintings from his debut album What’s Knew have been exhibted at Outside Gallery, Pretend Gallery, and AR Projects. His work has been exhibited at the University Art Museum at CSULB and featured in the LA Weekly. In 2016 Hornedo began working with performance artist Anthony Bodlović on a podcast project called Rated PG. It aired on KPFK 90.7FM from November 2016 to February 2017. Episode nine premiered at PØST for Hornedo’s solo show of landscapes called Now Showing. His studio is called Pretend Gallery. He lives and works in Echo Park, Los Angeles.