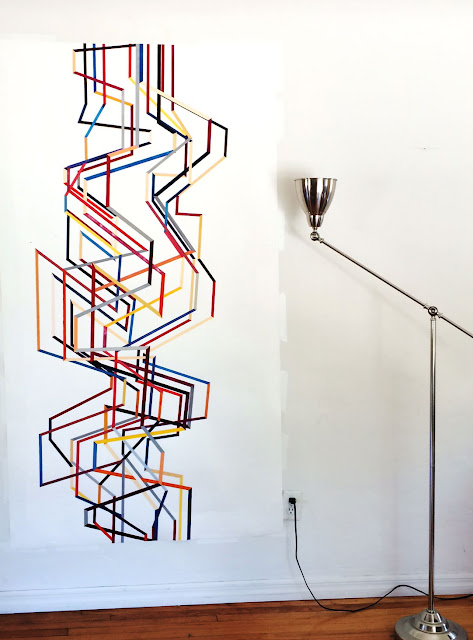 In his new body of work, Funk City, Leonardo Bravo stretches elements of scale and a complex visual vocabulary to explore states of fluidity, transition, and continuous movement.  The individual works point to the constructs of the urban environment; the inherent tensions, pressures, and counter logic that form narratives of individual and collective loss.  Yet they also position these as sites of unfettered liberation, boundary traversions, and ultimate shape shifting. Through the inherent tension between lines, colors, and space the works in Funk City are akin to visual mappings or wall markings calling forth a collision of histories, voices, imaginings, and incantations.  Although these works are not by themselves illustrations of a rich source of inspiration, they function as evocations to be read, suggestive of a complex and compelling symbol system.

Leonardo Bravo's paintings draw upon the language of modernist geometric abstraction through complex structures and systems in saturated colors that suggest a constant state of becoming and unfolding. These works take their cues from a variety of sources including Bauhaus master weavers Gunta Stolzl and Ani Albers, the wall drawings of Sol LeWitt, the works of Brazilian artist Helio Oiticica, and traditional South American woven tapestries. Inherent in these structures is the visual tension suggested by the relationship of each color form to the other, and the way in which negative space becomes a counterpoint to each fixed form. The complexity of these structures suggest an architecture of time and space in which forms continue to build and collapse upon each other, emanating new relationships, and suggesting pathways that open up to limitless possibilities, questions, and complexities.

Born in Santiago, Chile, Leonardo Bravo earned his BFA from OTIS Institute of Art & Design and MFA from the University of Southern California.

The son of the world renowned master xylophonist Kakraba Lobi, S.K. Kakraba Lobi undertook traditional training in xylophone from a young age. He was a xylophone instructor at the International Centre for African Music and Dance, University of Ghana, Legon and a member of Hewale Sounds.

The Gyil is an important instrument among the Lobi, Sisala and Dagara people of the Upper regions of Ghana, who employ them for both funerals and festivals and one of the grandparents of the mallet keyboard family. It is made from fourteen wooden slats that are suspended, on a frame, over calabash gourds. Its sound is like the Western marimba, yet more "earthen” in character. It is the national instrument of the Lobi and Dagara people of Ghana, Burkina Faso and Cüte DÃIvoire.
Throughout West Africa, the people believe that its “woody” sound comes from a vibration of water that physically balances the water in the bodies of humans and animals.