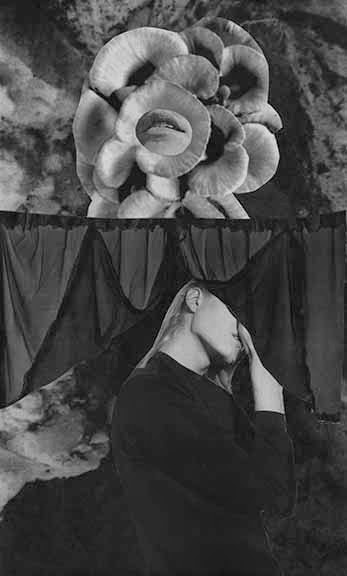 Possession and the séance experience, therefore, bore witness not to the emergence of particular sexual drives or needs as in the binary model of sexual difference, but rather to the discourse of the polymorphous, paradoxical, deviant, erratic, eccentric, even scandalous nature of desire—and its enactment. The materialisation séance, like a theatrical or fantasized scene, established the conventions which made possible the staging of desire.
—Alex Owen, The Darkened Room

Cindy Rehm’s exhibition, Psychical Research, features a series of collage drawings and video inspired by Victorian mediumship and the book Phenomena of Materialization. The text documents séances between 1909 and 1914 featuring the medium Eva C., and includes reports of sittings, maps of the séance room and detailed accounts of the medium’s gestures, utterances, and materializations. Like women stricken with hysteria, the mediums of the early 20th century fell into trances and challenged conventions of proper feminine conduct through a wide variety of erratic behavior including bodily contortions, spontaneous vocalization, automatic writing, channeling sprits, and the production of ectoplasmic forms.

Rehm looks to the liminal space of the trance as a rich site for the creation and vocalization of potent female narratives. She blends fragmented found images of the body and natural forms to reflect on the expansiveness of female experience, spirituality, and desire. In her video Double Thread two young women engage in an imagined preparation for a séance. The women enact quiet rituals as they interact with mysterious materials that mimic the white gauzy substance known as ectoplasm. The looping video speaks to the intimate bonds between women and to the ceaseless generative potential of their performing bodies.

Cindy Rehm is a Los Angeles based artist and educator. She is the co-founder and director of Craftswoman House Temporary Residence a project dedicated to presenting feminist centered works in Southern California. She is a member of the Association of Hysteric Curators and former Director of the Baltimore installation space spare room. Rehm is the recipient of an Individual Artist Fellowship in Media from the Tennessee State Arts Commission, Learning to Love You More Grant, and a Faculty Development Grant from Middle Tennessee State University.

Rehm’s work may be viewed at cindyrehm.com