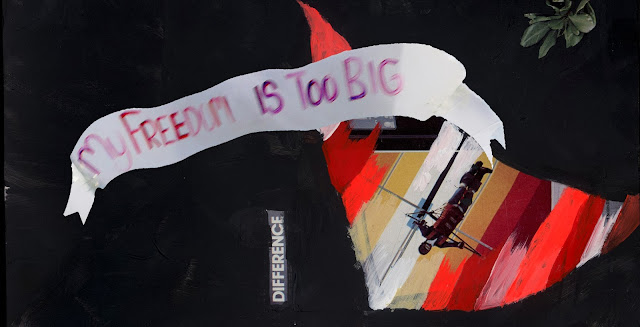 
“You want
Better cars
And a better heart
Another start
Yo' own yard
And a place to park
You wanna Trust 'em ??”
-Trick Daddy, America


Elephant is pleased to present home(-)free, an exhibition of new works by Sofía Córdova and Megan Lindeman.
Córdova’s and Lindeman’s works both question the nature of freedom as it relates to American-ness. Questions of origin, outsider/insider status, belonging (and not belonging), political and historical patterns come together through photography, painting, video, sound and performance.
Lindeman’s project, My Freedom Is Too Big, uses the expansiveness of the Western American landscape as the backdrop for the proclamation of personal freedom. My Freedom Is Too Big began in 2011 at the start of the Arab Spring and presents a collage of abstracted images of protests in Tahrir Square alongside photographs of hand-painted banners floating over the open landscapes of California. The banners, which depict colorfully painted statements such as “My Freedom Is Too Big” and “I’d Like to Tell You Why,” are thrown in the air and photographed in California’s picturesque landscapes. Their depiction plays in contrast to most contemporary visual depictions of the fight for freedom -photographs of mass protests, police brutality, blood and violence-. Lindeman’s composite of abstracted protest imagery and the Californian landscape create a wallpaper of sorts, on top of she scrawls in crayon and gouache. The results resemble cave paintings, emphasizing the connection between the 30,000 year-old act of painting and the need for demonstration. In doing so, Lindeman points to a shared origin between this act of expression and the act of protest.
Lindeman also presents Whoa, You Guys Ok? (2011-2014), a sound installation consisting of an original song and painted text on paper encased in acrylic glass boxes. The song layers Egyptian rhythms, old American military marches, and marches from the Ottoman Empire, the oldest military marches known to man. The artist’s voice is heard in a call and response asking, “Whoa, you guys ok?” and responding with “It’s cool.” Together the works present a visual and auditory concern for the other and yet reveal in the artist’s placid response a sense of apathetic detachment associated with ‘freedom’ in the West.
Córdova presents work meant to exist in a speculative near-future, where the decline of suitable conditions for human survival has brought about the end of culture as we know it. National identities have been stripped away, placing everyone in a state of not-belonging. In the series, The Kingdom Is Me (2013-2014), Córdova uses black paint to redact photographic documents of our cultural past based on our historic present as a means of mapping out the physical and psychic landscape of this uncertain future. The three channel video, They Held Dances on the Graves of Those Who Died in The Terror (2013-present), made up of digital re-recordings of the projections of 8mm black and white films shot in Miami, Los Angeles and Puerto Rico, focuses on a fading natural world. Images of birds, tropical plants and atmospheric events become the records of the lost past in Córdova’s fantasy future. The accompanying music is a mash-up of the song Fantasia, cover of Mariah Carey, and Tom Tom Club’s Fantasy and Genius of Love. The song -- which also is a part of Act I of the performance Odas Al Fin De Los Tiempos (2012-present) -- describes a world in which dances are held on concrete slabs under a dying sun and human survivors are in constant peril not just from hostile conditions but from each other. Act II of Odas consists of original material written through the use of tarot cards (something Córdova does not know how to do) thus tying the installation and performance together as a provisional voice of divination. An excerpted performance will be done as part of the opening.
Sofía Córdova (b. 1985, Carolina, Puerto Rico) received her MFA from the California College of the Arts in San Francisco in 2010. She has performed at SFMOMA, SomArts and Southern Exposure among others. Her work has been exhibited at the Sonoma Valley Museum of Art, AMOA/Art House, Galeria de la Raza, Queen’s Nails, The International Center of Photography as well as other venues internationally. Her work is part of Pier 24’s permanent collection. She lives and works in Oakland, California.
Megan Lindeman (b. 1981, Tucson, Arizona) received her MFA from Claremont Graduate University in 2008 and her BFA from Rhode Island School of Design in 2003. Her work has been exhibited at Chime&Co., Los Angeles, CA; Coup de Ville, Artist Village WARP- Contemporary Art Platform, Sint Niklaas, Belgium; and The Bemis Center for Contemporary Art, Omaha, NE. Her work has also been screened at the Beijing Film Academy, Modern Creative Media Academy, Quindao, China. She lives and works in Los Angeles, California.